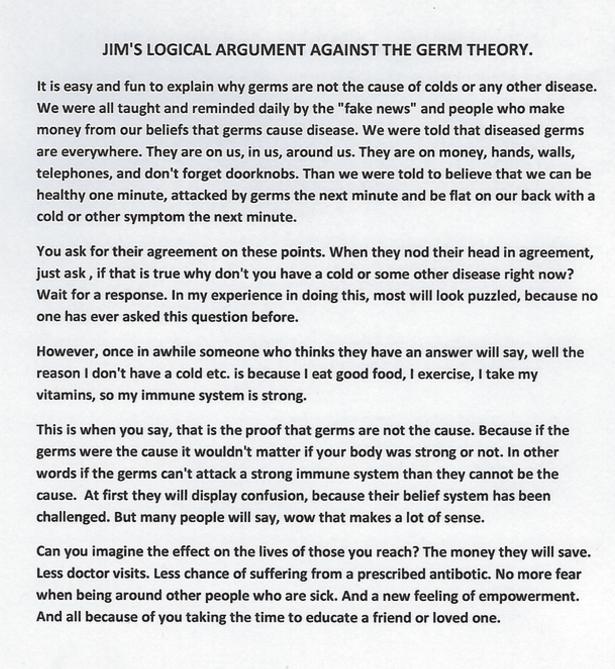 "I hold these truths to be self-evident, or, least, susceptible of positive proof and absolute demonstration : That the doctrines and theories commonly entertained among men, and taught in medical schools and books, and practiced by the great body of the medical profession, and which constitute the so-called "Science of Medicine," and on which the popular practice of the so-called "Healing Art" is predicated, are untrue in philosophy, absurd in science, in opposition to Nature, and in direct conflict with every law of the vital organism; and that these are the reasons, and the only reasons, why medical science does not progress as do all other sciences; why success in the healing art bears no due relation to the advancement of all of the collateral sciences, and to the progress of intelligence among mankind; why medical theories are ever changing; why all of its assumed principles are in controversy; its hypotheses in dispute; why its fundamental rules and primary premises are wholly overlooked or misunderstood; and why its application to the cure of disease and the preservation of health is so uncertain, so dangerous, often so fatal, and on the whole, so vastly more injurious than useful to the world." 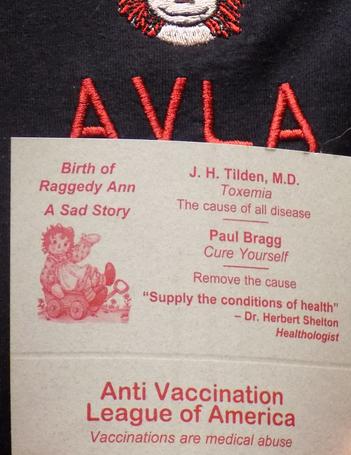 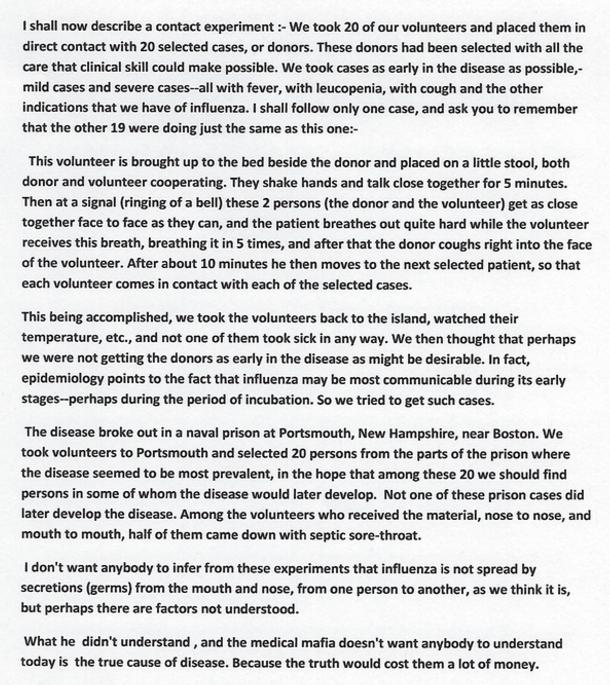 Fear rules us only if we let it.

Iatrogenics==The number one cause of disease and death in the United states.

Disease and death caused by doctors and hospitals. Look it up. 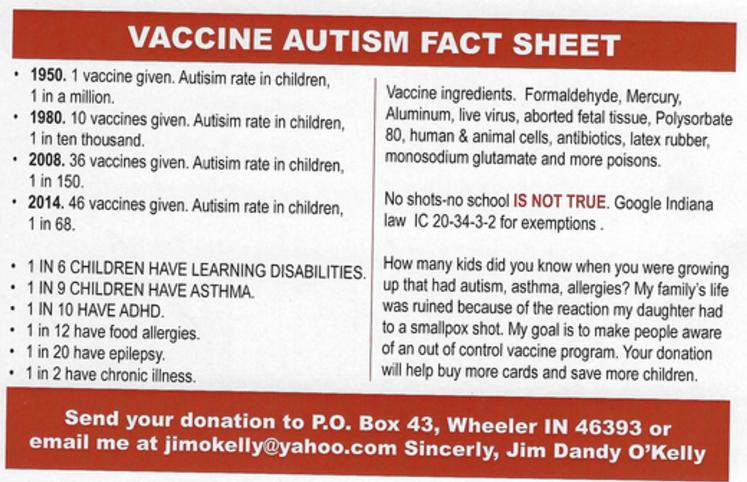 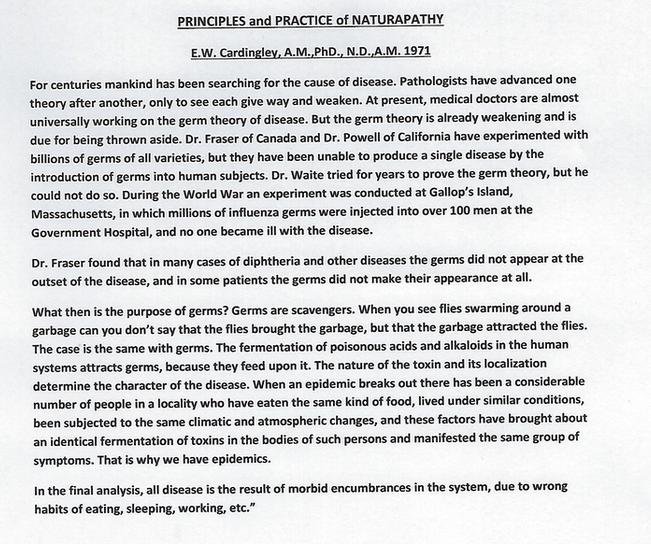 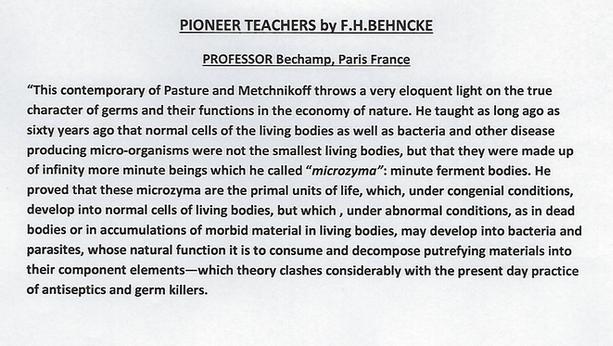 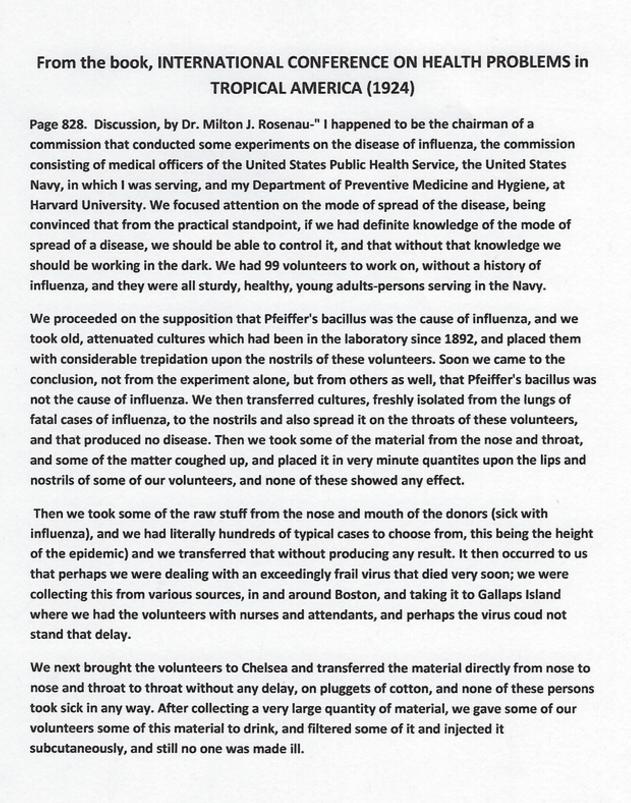 ​EXPOSING THE LIE THAT GERMS CAUSE DISEASE 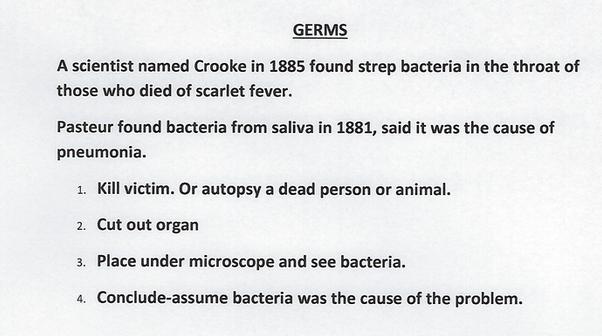 There have been many scientist in the past that have proven that germs do not cause disease by drinking a glass of germ filled liquid. I myself have done this many times with family members and my employees when they had a cold.

Here is an example.

Page 51. " Dr. Pettenkofer, a celebrated physician, and professor of the University of Vienna, also arrived at the conclusion that bacteria, by themselves, cannot create disease, and for years he defended his opinion from the lecture platform and in his writings against the practically solid phalanx of the medical profession. One day he backed his theory by a practical test. While instructing his class in the bacteriological laboratory of the University, he picked up a glass which contained millions of live cholera germs and swallowed its contents before the eyes of the students. The seemingly dangerous experiment was followed only by a slight nausea. Lately I have heard repeatedly of persons in this country who subjected themselves in similar manner to infection, inoculation, and contagion with the most virulent kinds of bacteria and disease taints, without developing the corresponding diseases.

A few years ago Dr. Rodermund, a physician in the State of Wisconsin, created a sensation all over this country when he smeared his body with the exudate of smallpox sores in order to demonstrate to his medical colleagues that a healthy body could not be infected with the disease. He was arrested and quarantined in jail, but not before he had come in contact with many people. Neither he nor anyone else "exposed" by him developed smallpox.

During the ten years that I have been connected with sanitarium work, my workers and myself, in giving the various forms of manipulative treatment, have handled intimately thousands of cases of infections and contagious diseases, and I do not remember a single instance where any one of us was in the least affected by such contact.